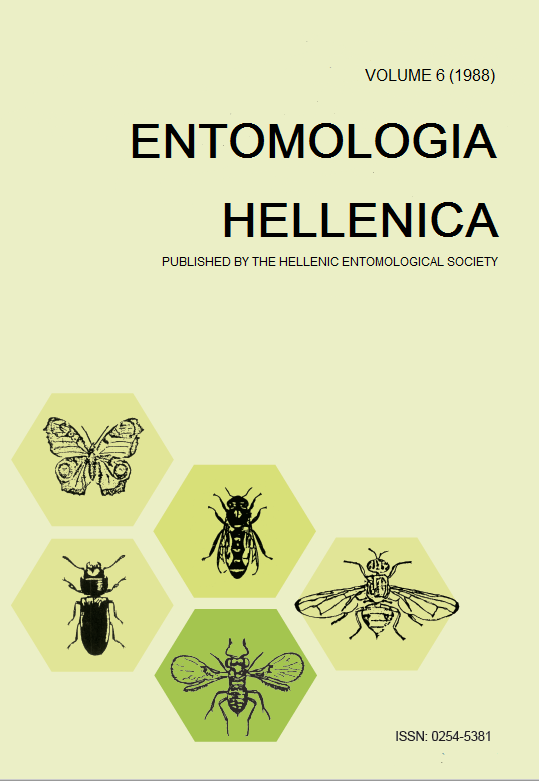 One of the most important archaeological findings of recent years has been the discovery of complete buildings of a Bronze Age settlement at Akrotiri on the island of Santorini (Thera). The settlement covers an area of over 200,000 square metres. The excavations conducted by Spyros Marinates brought to light a large number of buildings constructed of stones, mud and straw, with earth roofs. The walls were faced with clay. Almost every exposed mass of masonry in the settlement has been invaded by colonies of Hymenopterous insects consisting nests which are wreaking havoc on the walls, because they bore through the masonry to build their nests and then every time they go in and out of the tunnels, they wear away the dust of the walls which they have build for their own nests. Observations were carried out at Akrotiri in the spring and summer of 1985, 1986 and 1988. Glass collecting-tubes were placed at entry and exit points and at various places in the tunnels, to sellect the insects when the adults emerged in the spring, and insects also were collected with sweeping nets from the surrounding area and from light traps. Plants which were visited by adults of these species for pollen and nectar were also collected from round about. The insect species collected by these various methods were the following: Osmia (Chalcosinia) latredlei Spinola, 1806 (Hymenoptera: Megachilidae), Anthophora crinipes Smith, 1884 (Hymenoptera: Apidae), and Melecta albifrons albovaria Erichson 1840 ( Hymenoptera : Megachilidae). These three species were collected in all observation years in glass collectintubes. Of these A. crinipes and O. latreillei, which are solitary species, both build colonies with tunnels a short distance appart but not actually touching each other. The number of such colonies in the walls of the Akrotiri settlement is fairly large, and conspicuous through the holes of entrance and exit of the insects. M. albifrons albovaria is a predator on A. crinipes. It is known from the literature that all species of the genus Melecta prey on Anthophora species. The tunnels of both species are made by the females. At the end of each tunnel the female hollows out a number of cells and lays in supplies of pollen and nectar on which she deposits her eggs after mating. She then seals off each cell with a mixture of earth and saliva. Finally, when eggs have been deposited in all the cells, she closes the outer entrance of the tunnel. The larvae start developing once the tunnel has been sealed off. Thus after the hatching of the eggs, the insects spend more than thirty days as larvae, later on as prepupae. In this stage they overwinter and early in the spring enter the pupal stage. The first adults appeared from the last days of March. The females mate with the males and then start making tunnels and cells for their eggs. Adults of both sexes visit flowers to feed and also, in the case of the females, to collect pollen and nectar for the cells in which the larvae will develop. In the neighbourhood of Akrotiri we have observed adults of both species in question visiting flowers of the following species: Reichardia picroide(L.) Roth (Compositae), Echhon angustifolium Miller (Boraginaceae), Vicia vilosa Roth (Leguminosae), Euphorbia spp. (Euphorbiaceae), Salvia  verticillata L. (Labiatae),Rosinarinuin officinalis L. (Labiatae), Morina persica L. (Dipsacaceae). Fahringer reported only Anthophora crinipes in Asia Minor and observed that adults visited the flowers of Salvia verticillata and Morina persica, but it is not clear if the insects collect pollen or nectar or both of these plants. The adults usually choose sunny days to fly out to the flowers, and during their flight a caracteristic buzzing is heard. The flying season be­gins in late March and goes on until the end of June, or some time later. The damage done by these insects to the fabric of the ancient settlement at Akrotiri is posing a serious problem for the preservation of the ruins in their present form. If it continues there is danger that parts of the masonry will be permanently deformed. Little heaps of fine pozzolana dust made by the insects going in and out of the tunnels is found on the ground below the entrance holes. In the last two years the team of archeaeologists  has used light traps in and around the ruins, thereby apparently reducing the populations of these insects and limiting the damage done by them. On the basis of the insects collected in May 1988, the population of A. crinipes outnumbers that of O. larreillei (ratio 79:21).

Authors retain copyright and grant the journal right of first publication with the work simultaneously licensed under a Creative Commons 4.0 license.