Exploiting Television in Open and Distance Learning: The Case of Undergraduate Courses in Cultural Studies at the Hellenic Open University 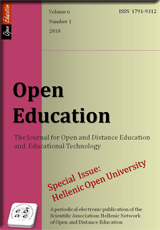 This study aims to explore the level of integration television has in the educational process of the undergraduate courses of cultural studies of the Hellenic Open University (HOU), based on Bourdieu’s theoretical standpoints. Acquisition of the research data was performed through a suitable questionnaire. In this research 394 students participated, from the courses «Studies in the European Culture» and «Studies in the Greek Culture». The principal findings of the research are the following: Television is not integrated in the institutional habitus of HOU, regarding the way distance learning is provided. Nevertheless, the majority of the students of the sample approached educational knowledge in a constructivistic way, finally integrating television, which comprises an element of modern humans’ habitus, in personal learning tactics. Finally, the sample’s students desire the exploitation of television from HOU, like many Hellenic Open Universities do, in an international level. They also expressed their desire that HOU will create television educational courses, focusing mainly on presentation of museums, archaeological sites, historical documentaries as well as teachings and lectures clarifying the confusing parts of their educational material.