Soviet policy in Europe: A challenge for the 70's 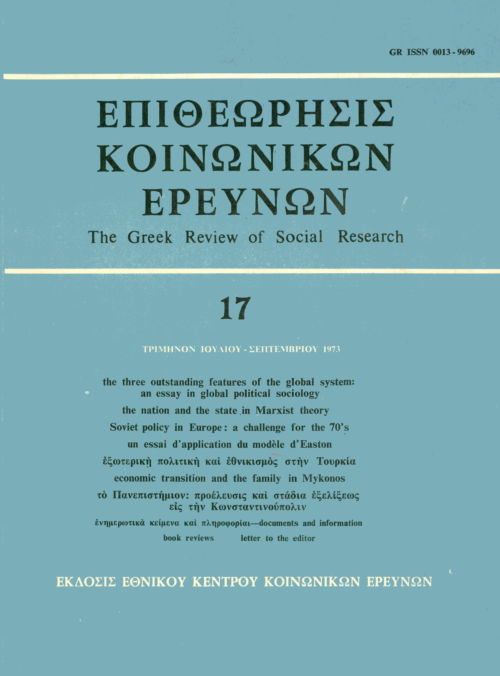 This work is licensed under a Creative Commons Attribution-NonCommercial 4.0 International License.

Paul M. Angelides was born in Xanthi, Greece in 1939, and
moved to the US with his family in 1951. He received his M.A.
in 1969 and his Ph. D. in 1973 from the Ohio State University,
and has served as Assistant Professor of Political Science at
Rio Grande College since 1970. His major interests, both as
research and academic subjects, include political development
and political integration, comparative political theory, Soviet
foreign policy, the role of ideology in policy formation,
and the impact of modernization on Greek political and sociocultural
development. He has served as research and teaching
assistant at The Ohio State University during 1968-1970,
and has conducted extensive research in the areas of political
development and Soviet politics and foreign policy. His major
writings include Political Development and Politcal Decay
in Interwar Greece (Unpublished Ph. D. Dissertation,
The Ohio State University, 1973), and his publications include
«The Idea of Political Development», The National Herald,
New York, 1970. He is currently engaged in research on the
theoretical implications of the phase-sequence model of political
change and/or development, and is planning a series of
articles for publication in this and other areas.