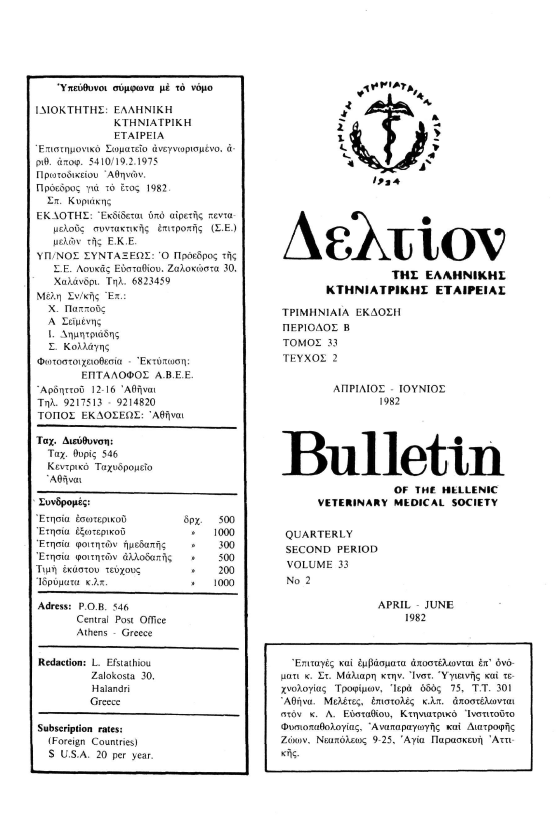 Actaplanin is a glycopeptide antibiotic produced by a strain of Aciinoplanes missouriensis. To assess the efficacy of actaplanin as a growth promoter for broilers, the drug was fed at concentrations of 0, 5, 10, 15, 20 and 40 ppm in 8 floor pen trials in Greece, where a total of 9,440 Hubbard broilers were tested. Monensin was used as an anticoccidial agent in all trials at a concentration of 100 ppm. No adverse reactions attributable to treatments were observed in any of the eight trials. The overall average total mortality for the above treatments was 3.63, 3.38, 3.20, 2.83, 2.90 and 3.14% respectively. Average liveweights per bird at trial termination (49 days) for birds medicated with the above treatments were 1491, 1506, 1548, 1539, 1544 and 1525 g respectively; while overall feed gain rations were 2.210, 2.177, 2.171, 2.154, 2.157 and 2.154 respectively. Overall pooled statistical analysis of the results of these trials revealed that mortality was not affected by any concentration of the drug and that all actaplanin treatments produced significant improvements in weight gains and feed/gain ratios when compared to non-medicated controls. The results therefore support the effectiveness of actaplanin as a growth promoter for broilers 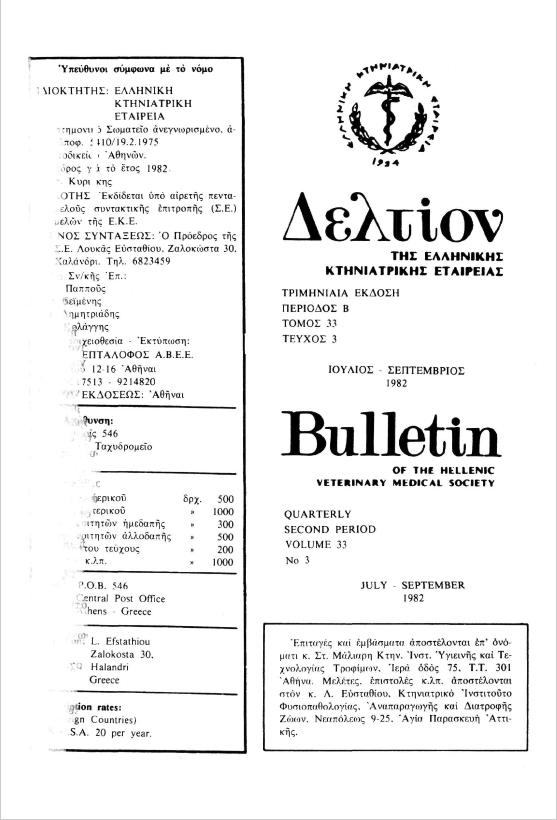 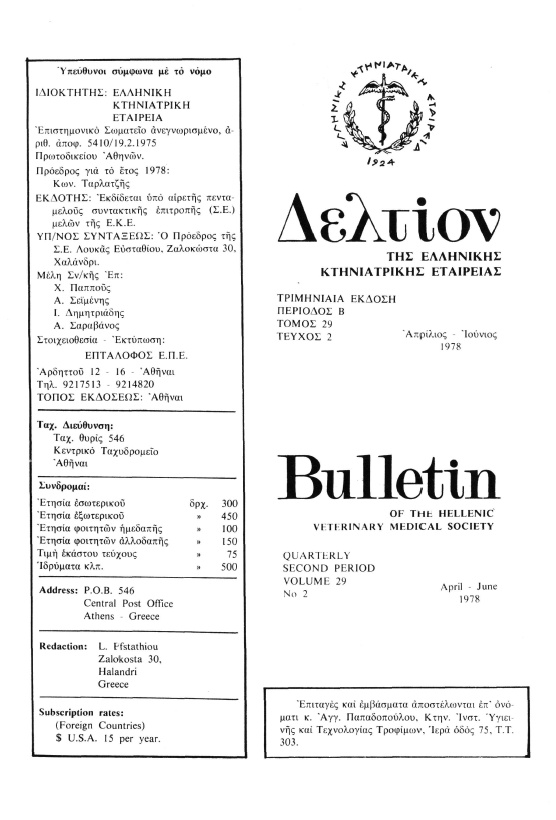 Article: Study upon the efficacy of apramycin water soluble in weaned piglets suffering from colibacillosis ,
Issue: Journal of the Hellenic Veterinary Medical Society : Vol. 29 No. 2 (1978) 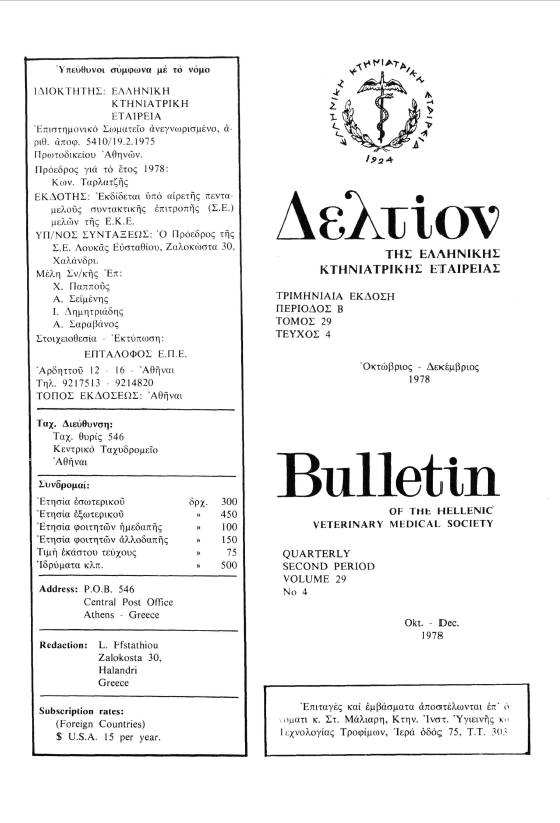 Article: Study upon the efficacy of apramycin in the treatment of colibacillosis in young calves ,
Issue: Journal of the Hellenic Veterinary Medical Society : Vol. 29 No. 4 (1978)

Article: In field evaluation of injectable appramycin for the control of naturally occuring colibacillosis in young calves ,
Issue: Journal of the Hellenic Veterinary Medical Society : Vol. 33 No. 2 (1982) 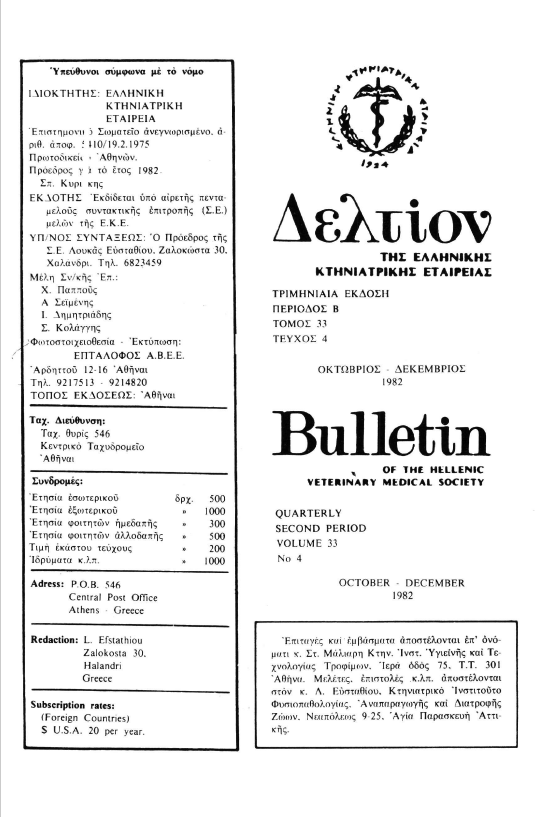 Article: I. Evaluation of apramycin soluble powder administered orally in piglets for the treatment of neonatal coliform diarrjoea: A pilot study ,
Issue: Journal of the Hellenic Veterinary Medical Society : Vol. 33 No. 4 (1982) 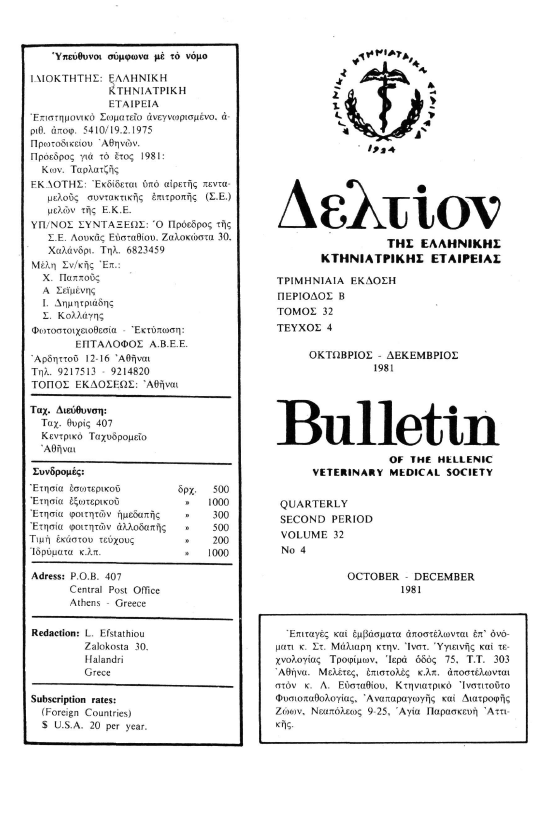 Article: Serotypes of E. Coli from piglets with diarrhoea ,
Issue: Journal of the Hellenic Veterinary Medical Society : Vol. 32 No. 4 (1981) 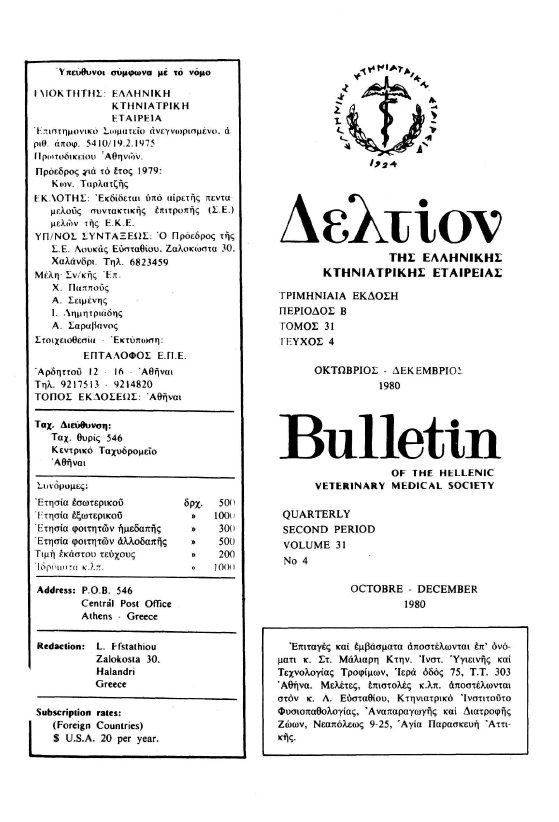 Article: II. Evaluation of apramycin sulphate in piglets in a novel oral formulation for the treatment of neonatal coliform diarrhoea: A dose titration study ,
Issue: Journal of the Hellenic Veterinary Medical Society : Vol. 33 No. 4 (1982)

Article: Research on the existence of Haemagglutination inhibiting antibodies to porcine parvovirus in pig sera in Greece ,
Issue: Journal of the Hellenic Veterinary Medical Society : Vol. 29 No. 4 (1978)